Supporting the movement for freedom in Iran with tangible policies! HÁWAR.help’s catalogue of political appeals for dealing with the Iranian regime

The protests of Iranian civil society against the clerical-authoritarian leadership of the country continue. The murder of Jina “Mahsa” Amini has especially fueled the open protest of women against the forcible enforcement of the compulsory veiling by official (and self-appointed) guardians of morality. But it is not just a protest by women, and certainly not “headscarf protests”, as some newspapers in this country have headlined: Meanwhile, a broad protest movement is questioning the constitutionality of the Islamic Republic as a whole and challenging the entire power elite in Iran. The regime in Tehran is taking merciless action against the protest: According to current reports from human rights organizations, such as Human Rights Watch, more than 150 people have been killed and countless injured. There is evidence that people are being imprisoned without trial and murdered in the streets by the regime. In prisons, detainees are subjected to torture and reprisals and are forced to make confessions. The German government has laid down a feminist foreign policy in its coalition agreement. Now it’s time for them to put it into action and fully implement it.

HÁWAR.help makes these 10 political demands in light of the dire situation of women’s and human rights in Iran:

1.) An immediate suspension of deportations of Iranian citizens who are currently in Germany. Deportation to Iran is tantamount to a death sentence for many who have fled to Germany from persecution and disenfranchisement in Iran.

2.) An easing of entry regulations for Iranian citizens as well as easier access to residence permits. Gender-specific violence and persecution in Iran must also be urgently taken into account in asylum procedures. Germany is committed to this under the Istanbul Convention.

3.) Increased protection measures for Iranians in exile by German security authorities, as well as contact and reporting points for those affected by Iranian state violence that reaches beyond Iran’s borders. Foreign intelligence services must not be allowed to endanger the freedom of speech and expression as well as the integrity of life and limb of people on German territory! In view of the current situation in Iran, the Federal Republic of Germany must fulfill its duty to protect to a greater extent!

4.) Measures that directly affect Iran’s power elite: Confiscation of assets and property on German territory. Freezing assets of Iranian individuals and organizations/entities that are directly responsible for the violence against the protesters or enable and facilitate it. This may, for instance, include companies based in Germany that are complicit in the regime’s restriction of internet communications in Iran.

5.) No more political cooperation with lobbyists of the Iranian regime, neither on local, state or federal level. 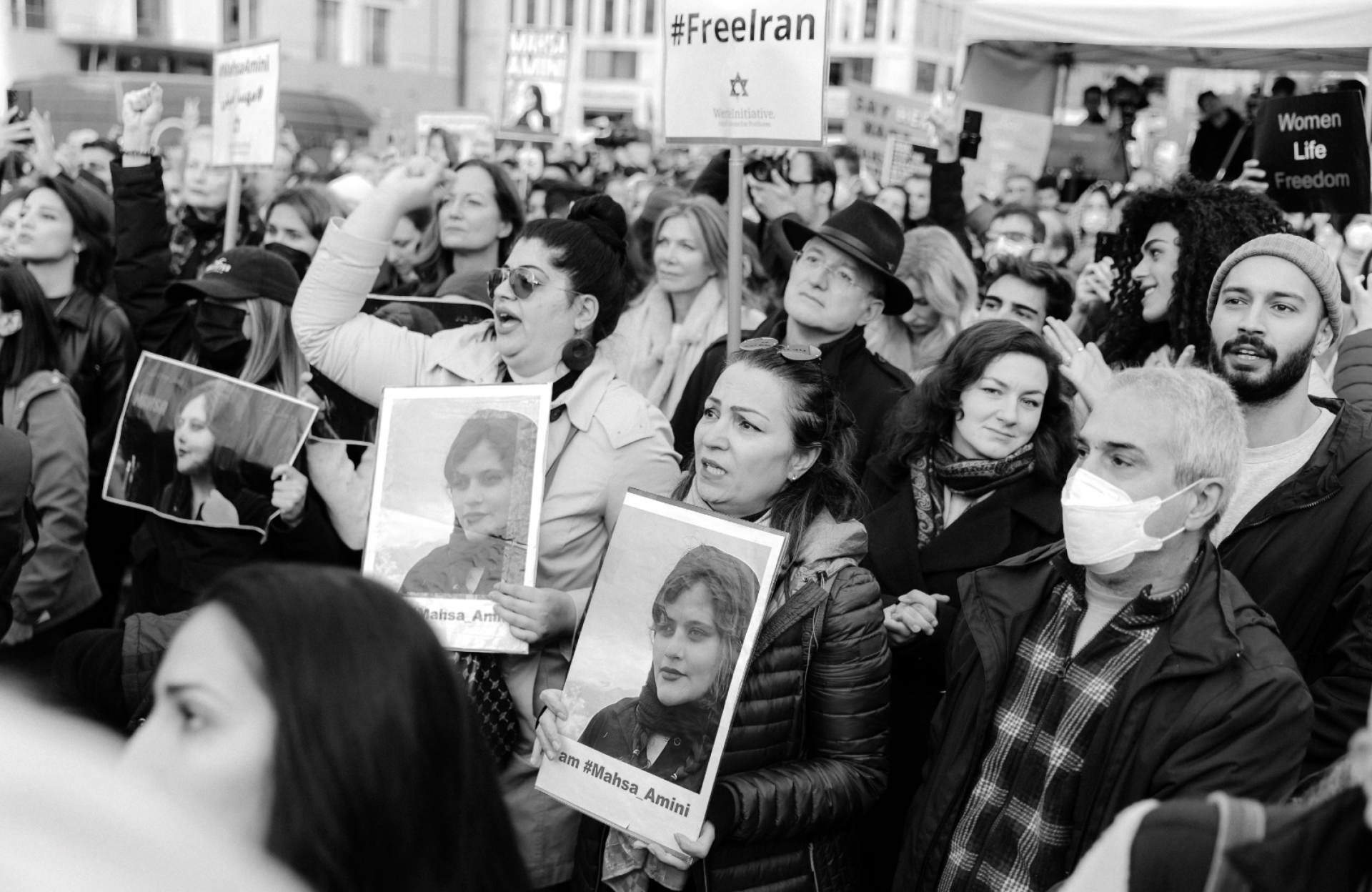 Protesters at the HÁWAR.help solidarity rally for Iranian women's movement and in remembrance of Jina "Mahsa" Amini 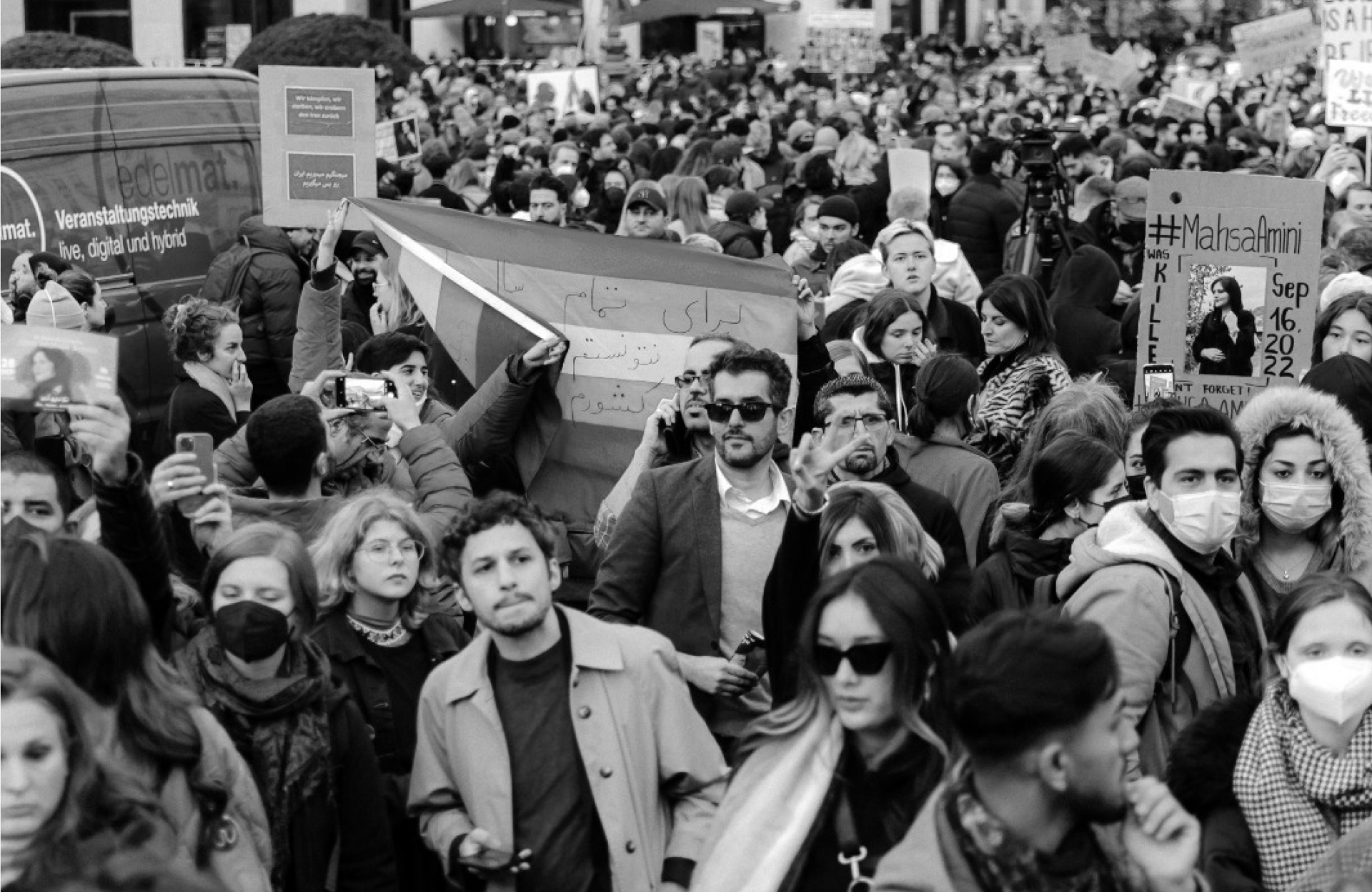 6.) A sanctions policy that does not affect the civilian population in Iran. It must be possible to impose far-reaching sanctions on the Islamic Republic of Iran, which prevent the expansion of the nuclear program for military purposes, WITHOUT the sanction measures affecting Iranian civil society economically.

7.) No negotiations with the murderers of Jina Mahsa Amini – suspend nuclear negotiations until further notice. During the negotiations, the Islamic Republic was promised a lifting of economic sanctions. This money would not be used to develop civilian infrastructure but would be used to further destabilize the entire region. This is suggested by Iran’s gradual withdrawal from the agreement in recent years. Moreover, the resumption of negotiations would lend political legitimacy to the regime’s current violent actions toward its population on the international stage.

8.) Iranian civil society and exiled Iranians must be urgently and comprehensively involved in the processes related to political dealings with the Iranian regime. In particular, women and members of minorities (ethno-religious groups, members of the LGBTIQ+ community, and any other discriminated groups) must be included. This is the only way to take measures that will be effective.

9.) The Federal Republic of Germany must immediately demand the documentation of human rights and women’s rights violations by UN bodies, mandate holders and other independent international organizations and participate in the implementation, so that, at a later stage, legal redress is possible and women’s and human rights violations are persecuted.

10.) A shift in the Iran policy of the Federal Republic, which puts the focus on women’s and human rights and not short-sighted economic interests above all other concerns. Last but not least, this aspect has been agreed upon in the coalition agreement through the commitment to a feminist foreign policy.