WE NEED YOUR SUPPORT: FOR THE 180° TURNAROUND IN GERMANY’S IRAN POLICY!

Let us support the people in Iran actively and with concrete policies: With HÁWAR.help we have formulated 11 demands to the German Bundestag. Sign and share the petition until 22.11.2022!

SUPPORTING THE FREEDOM MOVEMENT IN IRAN WITH CONCRETE POLICIES

40 days have passed since the death of Jina “Mahsa” Amini. 40 days in which numerous people in Iran have turned grief into anger and have stood up against the daily harassment and violence with which the Mullah regime harasses especially the women in the country. In order to support the courageous people in Iran in their struggle for freedom and self-determination, we are addressing the Bundestag with a petition containing 11 demands – for a change in Iran policy. In Iran, the murder of Jina “Mahsa” Amini by the Iranian morality police tipped the scales: isolated protests have turned into a revolutionary movement demanding an end to the Islamic Republic of Iran. Those in power are trying to break this revolution: Evidence shows that people are being imprisoned and murdered in the open streets by the regime. The people fighting for freedom must have our support. For this, we have drafted eleven demands. 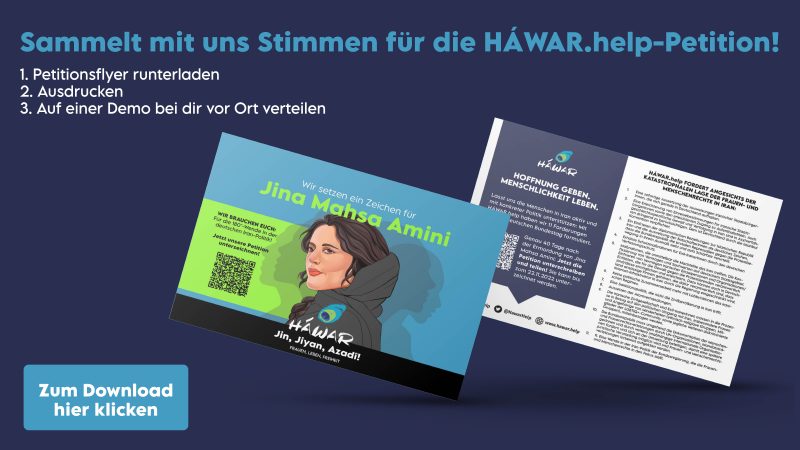 IN LIGHT OF THE CATASTROPHAL HUMAN RIGHTS SITUATION IN IRAN, HÁWAR.help CALLS FOR

1.) An immediate suspension of deportations of Iranian citizens who are currently in Germany.

2.) An easing of entry regulations for Iranian citizens as well as easier access to residence permits. Gender-specific violence and persecution in Iran must also be urgently taken into account in asylum procedures. Germany is committed to this under the Istanbul Convention.

3.) A freeze in diplomatic relations with the Islamic Republic of Iran and the expulsion of its ambassadors as a clear sign that the Federal Republic of Germany doesn’t look away from the brutal crackdown against the protest movement and condemns it in the strongest possible terms.

4.) Increased protection measures for Iranians in exile in Germany by the German domestic intelligence services.

5.) Measures that directly affect Iran’s power elite: Confiscation of assets and property on German territory. Freezing assets of Iranian individuals and organizations/entities that are directly responsible for the violence against the protesters or enable and facilitate it. This may, for instance, include companies based in Germany that are complicit in the regime’s restriction of internet communications in Iran.

6.) No more political cooperation with lobbyists of the Iranian regime.

7.) A sanctions policy that does not affect the civilian population in Iran.

8.) Suspension of the nuclear negotiations with Iran until further notice.

9.) Iranian civil society and exiled Iranians must be urgently and comprehensively involved in the processes related to political dealings with the Iranian regime. In particular, women and members of minorities (ethno-religious groups, members of the LGBTIQ+ community, and any other discriminated groups) must be included.

11.) A shift in the Iran policy of the Federal Republic, which from now on puts the focus on women’s and human rights. 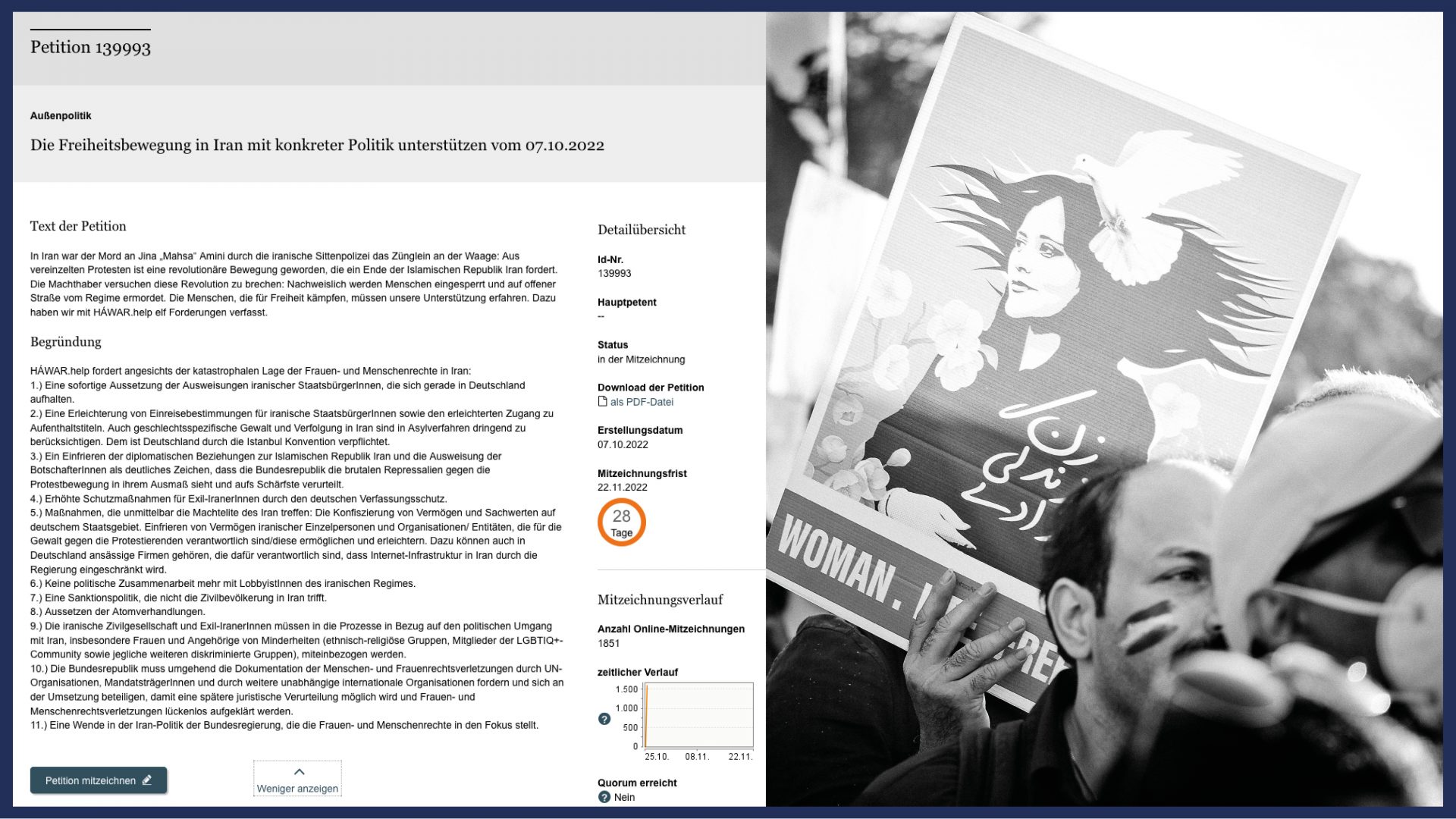